The road from Altavista to Evington is a narrow, sometimes very curvy two-lane highway, 10 miles of country road.
For a long time, I was never actually sure when I’d arrived in Evington. It’s more of a zip code than a defined place. But the longer I live in this part of the county, the more defined it becomes.
I visited Evington Monday evening to cover a community meeting for the newspaper. One of my regular beats is county government, and one of the issues facing government is how to help people in the county who are experiencing well water problems.
The county has come up with some options to consider, and the meeting was to get some early feedback from residents who would be affected by any decision made.
I’ve already done several stories on the issue, and I looked forward to attending this meeting.
But it wasn’t just the meeting that drew me. Part of the reason I looked forward to going to Evington was because I enjoy the drive.
I was behind the wheel Monday night, so I couldn’t take many photos.
But I noticed the hay and corn fields, the way the land rolled along in hill after hill.
I noticed the round bales of hay out in the field or, in one place, lined up beside the barbed wire fence that ran parallel to the road. I thought of my fellow bloggers who are busy raking and baling hay.
I noticed how the early evening sunshine still lit most of the fields, while the trees at the edges were growing darker green as the light faded.
I arrived at the intersection where the Evington post office is and turned left. That’s where the road becomes very curvy, almost turning on itself as it weaves down to the railroad crossing. 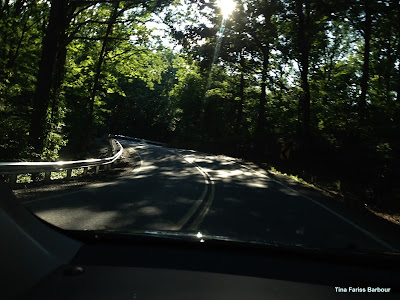 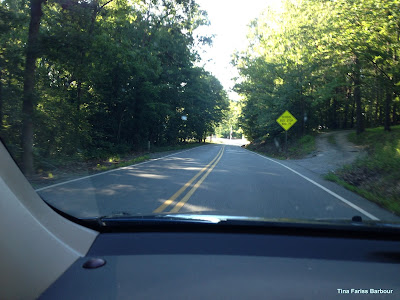 Then I was at the building where the meeting was held.

I was there for over an hour and a half, but the time flew by. I listened to people express their concerns, for themselves and their neighbors. I saw people from all walks of life, from different backgrounds, discuss common concerns.
I felt community.
One of the blessings of my job is the way I have become more of a part of the community. I’ve met people I never would have met, chatted about the mundane, asked questions about the serious, struggled to capture the essence of a story for the readers.
I’m an introvert. I tend to shy away from anything resembling a crowd. I have depression that sometimes makes me question my reason for living.
But times like Monday night remind me that I’m part of a community—really, more than one community—and part of my purpose lies in those communities. That’s a comfort. 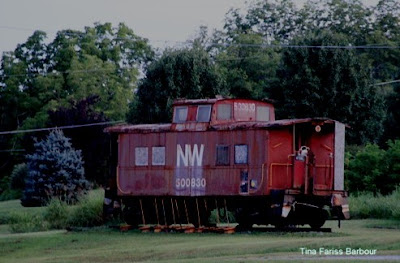 It was a comfort, too, to step outside at the end and look at the beautiful land around me becoming dark. I caught a photo of the red rail car that sits beside the long graveled driveway and then drove back along the same narrow roads. I couldn’t see the fields as clearly, but I knew they were there. I knew the people working hard behind those fields were there, somewhere.